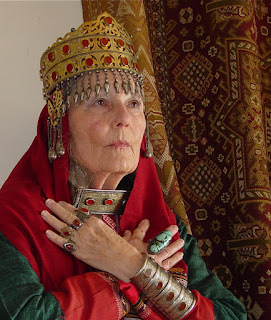 Turkoman Teke Tribal Woman's Attire in Merv, Turkmenistan
Click link to see more such jewelry.
First the tall gilded silver and carnelian jeweled head covering is usually worn as a support for the veil, hidden except for the high front part.   This shawl or veil is made of finely woven silk, embroidered with traditional tribal symbols.  The spinning of the silkworm's web and the weaving, sewing and embroidery are all done by hand.

The plain and gilded silver jewelry are made by the male silversmiths of the tribe.  You can see this giant cuff bracelet at the studio that houses my collection.

These Teke tribal silver cuff bracelets with layered gold and table cut agate cabochons. Matched pair of bracelets dated to 1850-1900 by Dieter and Reinhold Schlecter in Old Silver Jewellery of the Turkoman. Heavily decorated in tribal symbols and with the superior craftsmanship of the Teke silversmith. Because of their age, each of the bracelets shows marks of repair, revealed in attached photos.

These are typical of the Turkoman silversmith's techniques. They worked mainly in silver that had been imported from surrounding countries in the form of silver ingots. This the silversmiths melted down and formed their own almost pure heavy silver plates. No rolled sheets used in the master silversmith's hands.

The traditional tribal designs were laid out in a layer of thin gold, not a wash but a very durable amount of gold on the silver.

This process is made much more difficult in the case of large bracelets. The bracelets are hollow. so two sheets had to be put together smoothly. Only the face of the bracelet was gilded. The edge of the bracelet is either signed or decorated with something that looks like calligraphy.

The gemstones used are nearly always carnelian, sometimes turquoise or glass. Edges of Turkoman jewelry usually have ancestor symbols attached in the form of stylized rams' heads or just the horns. The gilded cut-out patterns usually suggest plants or water.

The jewelry worn by a Turkoman female reveals her status in the tribe, whether a wife or an unmarried woman, and something of her standing in the wider community.  This is true of all the clothing worn by the Turkoman woman, from the jeweled collar necklace to huge breastplates that reach from the top of the chest to the waist line, a dressy robe of silk and embroidery, a head covering resembling the one above and rings and bracelets all are meant to show the status of the wearer.

The Champion Wears the Bazuband

In Mongolia, the nation's hundredth anniversary was celebrated on horseback.  The buzkashi games were played in many venues.  Buzkashi is still a popular sport in many parts of Greater Turkmenia, that is in all the places where the Turkic peoples influence the culture.  Northern Afghanistan is such a place.

Buzkashi is the oldest sport played on horseback.  It is the national sport of Afghanistan.  The horses are highly prized and are well-trained and well cared for. The champion, or Chapandaz, earns his award, the bazuband, to wear laced on his arm.  His chapan is also part of his award.  He wears the chapan, a handwoven silk robe, draped on his shoulders as you see in the photo below of President Hamid Karzai. 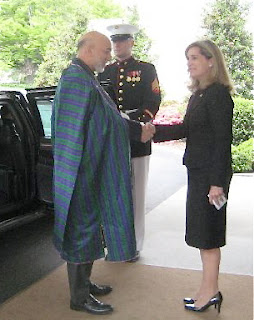 And on his arm the champion laces his beautifully worked silver bracelet that looks like the photo to the right of Karzai's photo:  the bazuband, the champion's bracelet for
the Afghan buzkashi winner, just as it was for the ancient Persian archer champion, from which the tradition is carried on.

The bazuband was a carryover from the ancient Iranians, or Persians, who fought their wars on horseback.  Often the battles would end with many horseless riders fighting hand-to-hand combat, a kind of no holds barred wrestling.  The heroes from the winning side of the battle were awarded the prize of a bazuband not only for their skill in archery but for their skill in wrestling.

A buzkashi field is laid out with a tall post at one end and a circle painted onto the ground at the other.  Inside the circle, the administrator of justice, the referee, has placed the carcass of a headless goat, gutted, but now filled with sand.  The members of each team parade onto the field in tribal regalia, wearing their padded chapans and beautifully embroidered padded helmets.  When I saw the game in Kabul in 1974, many of the team members wore their hair in the traditional Mongolian queue. 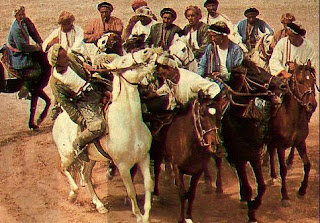 This is a game in action

The game begins with a judge deciding which team will pick up the goat carcass, the equivalent of our pigskin football, but larger and heavier, but easier to grasp than a wet football.  The team has already chosen their man who will pick up the goat.  Now the rest of the team must fend off the opposing team members while the man holding the goat carries it round the post at the far end of the field from where he picked up the headless carcass that you see the man in the white horse carrying in the photo above.

After he passes round that post, he heads pell mell down the field to the circle of justice, into which he hopes to toss the goat.  His journey is not easy, neither going up the field to go round the post, nor when it grows much more difficult as he starts back toward the circle of justice.  The opposing riders will use their horses and their whips against the team that is guarding their goat carrier.  The horses know the game very well.  They force their bodies against the horses of the opposite team so that the rider can reach and grab the goat carcass away from the man who is carrying it.  In this game, the goat may change hands many times, back and forth from one team to another, until the the goat is tossed into the circle, and then the struggle begins again.

Finally, when all the tournaments have been played for that particular season, a champion emerges to received accolades and awards.  He is named chapandaz, a wearer of the chapan.  What is more, he is awarded the prize of the bazuband, worn since ancient times by heroes of the people in both war and sport.

See this bazuband and more of the history here.