The continent of Asia extends from the Mediterranean in the West to the Pacific in the West: think Hong Kong.  I include in my own delineation of Asian borders as being  from Siberia in the North to the tip of Saudi Arabia in the South, but some might include a greater part of Russia.

Perhaps the most intriguing jewelry being worn in Asia are the very eclectic 'jangling' jewelry of the various nomadic peoples of the deserts of Asia, in the Karakum and Kizilkum of Turkmenistan, the Gobi and Taklamakan in China, the Sindh in Pakistan and the Sahara  in Arabia.  I call it jangly or jangling jewelry because it is usually put together in a way that makes a musical sound as the wearer moves.  Hollow bracelets may be filled with tiny pellets or stone chips so that they whisper with the wearer's movement.  For example this pair of Bedouin bracelets from the Arabian desert of Yemen was created with such an enhancement. 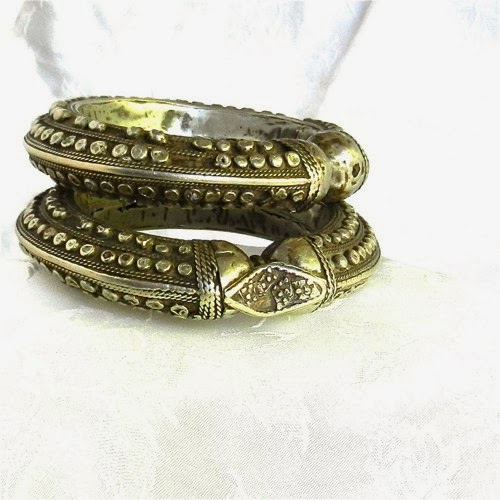 These bracelets are fabricated as hollow circles, having the jangly material added before soldering the two halves together.  The bracelet in the top position in this photo has been emptied of its contents by boring a tiny hole through it, so that act suggests that the jangly material is very small, such as large crystals of sand or the tiniest pebbles from the shores of the Arabian Sea perhaps.  The bracelet made in the same techniques as the one above still has its jangly contents and makes a pleasant sound as it moves around the wrist.

There will be more in this series on Ethnic Jewelry from Desert and City, including jewelry from some of the various regions of Asia.   See much more on Yemen jewelry at my website Crafts of the Past.