Restoring an antique relic of a vanished culture is intimidating.  Fortunately, I had access to appropriate jewelry elements that my family had collected through the years.  Here is a close up view of the final restoration of a Yemen dowry necklace. 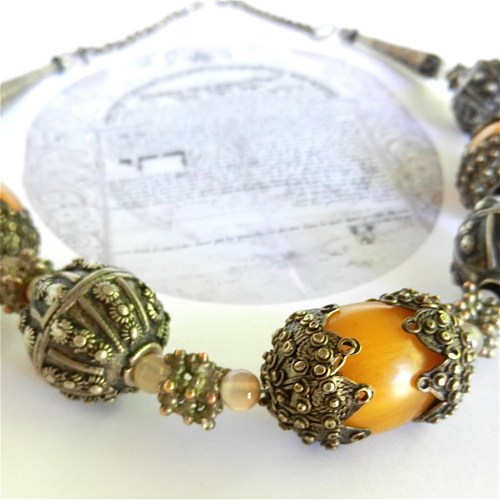 $760.00 U.S.   CONTACT ME for invoice or for more information by using the private message form above left.

All the ornate bead caps, the signed starburst pattern large hollow silver beads and the Bedihi beads as well as the necklace terminals had been preserved, but the faturan or synthetic amber beads that had rested between the caps and the small separator beads, typically of coral, were no longer with the silver  components.

Here is a more complete view of the now finished bridal dowry necklace from Yemen in the period around 1900 or a bit later.   I searched through my collection of faturan amber beads to find the ones that fit the ornate bead caps.  I find the European bakelite beads of that era very appealing, as did the jewelers of Yemen in the period of 1920 to 1940.  These particular synthetic amber beads were made in the late 1900s, but they were appropriate in color and size and could be used to good effect in restoring this fine piece of Yemen jewelry.

The small translucent agate beads are from Yemen.  The people of Yemen had prized agate beads from ancient times; the small cloudy gems harmonize culturally with the other beads and serve as  buffers between the ornate silver pieces.  By happenstance, I had an appropriate silver chain on which to hang my restored necklace. 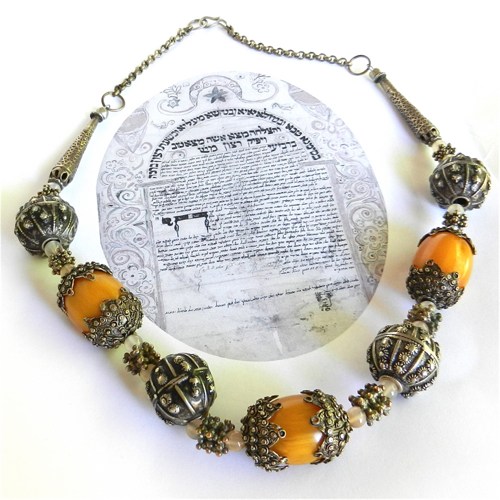 The old starburst beads show that the necklace on which they originally hung was worn a long time.  The signatures of the maker or makers are quite worn, but still recognizable as the archaic Arabic alphabet that was still being used in Yemen at that time. 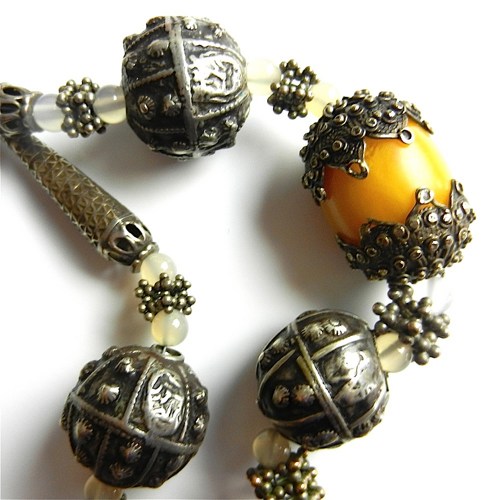 In the close up view above, you see the faint stamped cartouches of the silversmith who made that particular bead.  Also note the cloudy translucent Yemen agate beads and the very special and now rare Bedihi beads.  While you are viewing this close up, don't overlook the exquisite terminals on this necklace.  They are gems in themselves.

$760.00 U.S.   CONTACT ME for invoice or for more information by using the private message form above left.