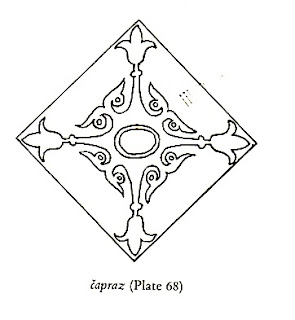 after Dieter and Reinhold Schletzer, Old Silver Jewellery of the Turkoman

The people of Turkmenia who are of Mongolian descent still respect some of the same sacred images that the Mongolians crafted into jade figures in pre-historic times.  The Turkic speaking people from the Altai mountain region had come down to the plains of Turkmenistan and most of its neighboring countries beginning around 500 A.D.  They were numerous in the region by 900 A.D.

From the time that they came down from the mountains, they continued to maintain their tradition of crafting sacred amulets in wood, weaving them into their garments and tent furnishings and wearing them on their persons in the form of silver jewelry.  By the late 1800s, their metal smiths were crafting fine jewelry in gilded silver decorated with the ancient tribal symbols, especially the ram's head or ox head, depending on the interpreter of the various pieces of jewelry.

If you mentally rotate the above image into a rectangle instead of the diamond shape in which it is  designed to be worn, you will see an abstract image of the horns and eyes of a male mountain sheep, known by herders as a ram.  The Turkmen were hunters of the mountain sheep while still in the Altai mountains, and followers of domesticated sheep bred from the mountain sheep when the tribes descended from their mountain home to the desert oases of Turkmenistan and surrounding areas.

On a different Turkoman ornament, you see more obvious imitation of the ram's horn, but without the eyes: 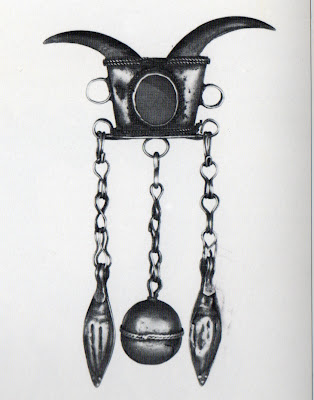 after Schletzer, Old Silver Jewellery of the Turkoman

And here is another, more decorative representation that is commonly used on the Teke tribe gilded jewelry of the early 1900s.   Here the cut-outs from the metal represent the eyes and even the nose and mouth are suggested in the cut-out pattern at the bottom of this motif:

after Schletzer, Old Silver Jewellery of the Turkoman

Can you find a similar image repeated on this antique silver Turkoman woman's pendant?

I contend that the Far Eastern Chinese culture such as the Liangzhu farming community that existed at the end of the pre-historic and pre-literate Neolithic period naturally chose the ox as the totem and for a mountain  people such as the Turkmen had been,  the same image would represent a mountain sheep ram's head.  It is the image of the curved horns that the Turkmen have carried into the decoration of their clothing, their tent and now house furnishings, their outdoor furnaces, their garments and their personal jewelry or the ritual ornaments worn by the shaman of their tribe.

These photos of items from my jade collection will show some of the common characteristics of this totem shared over time and distance by the long-lived Mongol cultures.  Here is a jade reproduction in more representational art than was used in ancient times when making the extremely hard jade stone into life-like images was a much more difficult art than it is with the coming of the industrial age when the image below was made in  red jade that was used by the ancient culture now named Liangzhu. 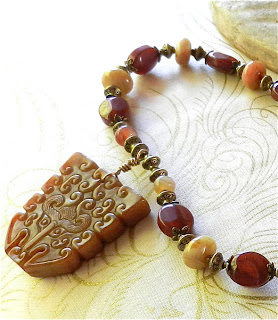 Read more about this piece HERE.

Below is the photo of a jade ox head crafted in antiquity in green jade and based on the late Neolithic Hongshan settlers along the Yellow River in what is now called Inner Mongolia:

Read more about this piece HERE.

The hole for hanging the jade pendant that represents the horns and eyes of the ox actually is hand drilled in the shape of an ox's nostrils and is called the Hongshan ox nose style of hole in the jade ornaments of that time.

I have one or two more blog entries for the comparison between the ancient Mongol cultures of the East and the Turkoman tribes of Central and West Asia.  Then I will return for a while to discuss the ornamentation of the more southern styles of jewelry in Western Asia.