Tripartite Asyk as Symbol of Family 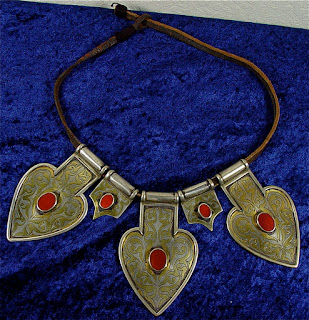 See more information on this piece at http://www.artfire.com/ext/shop/product_view/craftsofthepast/3920808/Antique
This piece is known as gosa-asyk.  The traditional design is an alignment of three plaques suggestive of heart shapes or female bodies.  In the Teke tribe, from which this piece originates, most such pieces have areas that are gilded.  In the tripartite gosa-asyk, between the three heart shapes, it is customary to place separators made of the same material.  In the case above, the pieces actually were cut from the same plate of patterned and gilded silver.  You can see how the pieces fit together by looking at the underside of the piece. 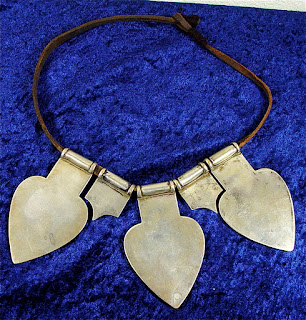 Both the examples that I have seen of this design of the tripartite gosa-asyk hang on a heavy leather cord which shows signs of long wear, but still very pliable and sturdy.  The silver also is a plate thick enough to resist even intentional force to bend it.  The plate of silver from which this Teke Turkoman family symbol is made is 2.8 mm thick.
The Turkoman that were interviewed by Dieter and Reinhold Schlechter for their book Old Silver Jewellery of the Turkoman reported that this is the Turkoman symbol for the family in their minds: Father, Mother and Child.
There are other jewelry designs that express this mindset: two larger asyk shapes with one smaller squeezed between them and all of them attached to form a solid pendant. 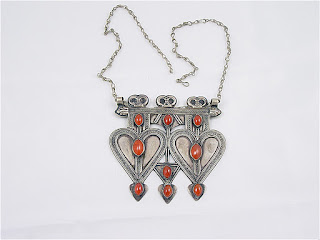 See more information on this piece at http://www.artfire.com/ext/shop/product_view/craftsofthepast/3780124/Turkoman
The heart or anthropomorphic female symbol expressed in the silver asyk is given by the groom's family to their daughter-in-law as a wedding present.  After marriage, the woman attaches the asyk to her two braids, the married woman's traditional hair style.  The Turkoman females wear more hair ornamentation than is typical among women in the Western hemisphere.  In wearing this particular piece, the woman reveals her married status and shows her family's intention to increase the tribe through her fertility.
Many Turkoman pieces are shown at  http://craftsofthepast.artfire.com
Posted by Anna Garner at 1:42 PM No comments:

The motive or tribal consciousness of the Turkoman is expressed in the ornamentation of their homes, their animals and themselves.  To this day in Turkmenistan, their outdoor bread ovens made of clay bear the ancestral commemorative symbol: the ram's horn.   You will almost certainly see the symbols in the carpets, on the walls of their tents or homes, in the embroidered panels of their chapans (men's cloaks) and the yokes of the women's dresses and the edging of their head covering.  Perhaps the most important place for the symbol is the grave marker.

The wood amulet was worn when they were mountain dwellers.  And the dagdan, an amulet made from the wood of the dagdan tree is still highly prized.  It not only commemorates the spiritual practices of their ancestors, but the trees are still there in the mountains, the origin of the Turkoman.  The dagdan carries the power of the ancestor and of the mountain.

But the ancestor symbol is most striking when we see it mounted atop a gilded silver amulet (prayer box) with the prayers and blessings sealed inside.  Such a piece of jewelry is usually worn by women, just as the wood dagdan is worn by women and children.  Here is an example of a gilded silver amulet (acar bag) made by the Western Yomud tribe in the first third of the 1900s: 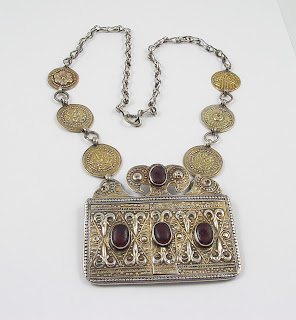 The central motif at the top of this amulet has an abstraction of a ram's head, the carnelian serving as the head and the outward curving gilded silver forms are the horns.  That is a very noticeable ram's head when the piece is worn.  More abstract are the embossed forms of the horns surrounding and dividing the carnelians on the front of the amulet.

You also note that the ram's horn is so decorative that it has a floral quality.  This reveals the Turkoman's instinct to abstract the essence of floral and arboreal forms as well as their beautiful water symbols in pieces such as this: 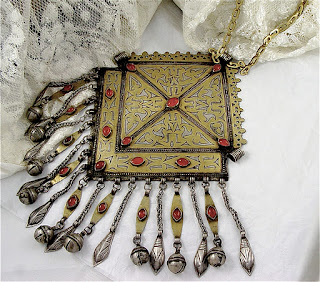 The flowing, almost rippling shapes that are purposely not gilded, but remain silver in order  more powerfully to suggest water in movement.  See more about this piece at http://www.artfire.com/ext/shop/product_view/craftsofthepast/3889681/Turkoman

Still, the mountain and the ancestor motifs are two of the three most important and most universal symbols among the Turkoman.  In my next blog post, I will discuss their symbols for the family.

Reference: Dieter and Reinhold Schlechter, Old Silver Jewellery of the Turkoman, 1983.
Posted by Anna Garner at 11:37 AM No comments:

The Mountain as a Turkoman Motif

The triangular plaque with pendants is as prominent as the dome in the repertoire of the Turkoman silversmith.  The triangle is often backed with a piece with the same cut-out patterns of flora that the front plate has.  This two-layered hollow structure is very common in the best of the Turkoman jewelry pieces.  The photo here shows a good example of this kind of workmanship: 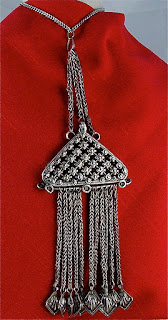 As you will note, the back and the front are almost identical.  But the space in between the two layers is open, as you see the red cloth background through either side.
Many mountain symbols or *tumar* are made of rather thick, solid silver, often with gold applied to certain parts of the pattern inscribed on the front.  The back of the plate is left plain.  As in this example: 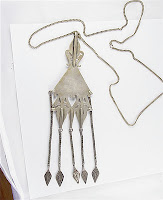 In these side-by-side comparisons of items that came from the hands of Turkoman silversmiths, perhaps from different tribes, but all hold the same world view, and all express their spirituality with symbols of the mountain of their origins (tumar), the dome (gupba), the family (triple asik), the amuletic tube (bozbend) or the rectangular prayer box (galaj?).  In the case of the tumar/bozbend the mountain symbol and the amuletic tube  are combined for a spectacular piece such as that shown in this photo: 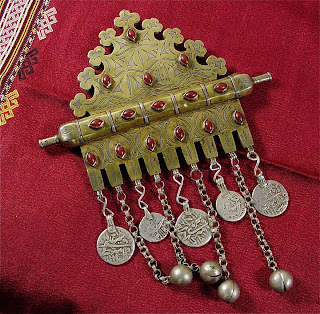 One of the serious studies of Turkoman culture, including the myths and symbols that express the mindset of the traditional Turkoman people, was done by Dieter and Reinhold Schlechter, Old Silver Jewellery of the Turkoman, 1983.   Copiously illustrated with drawings and photographs of the jewelry being worn by the people, as well as catalog photos from important collections.  It is a fascinating study of a culture that is in its vanishing stages.
More information on many different examples of Turkoman jewelry from items for everyday wear and also items of museum quality can be found at http://craftsofthepast.artfire.com
Posted by Anna Garner at 1:20 PM 2 comments:

The Dome as a Turkoman Motif

Further details on such items available at CraftsofthePast on Artfire.
The dome shape represents, naturally enough, the world as a reflection or the *other half of the sphere* in its relation to the heavens.  It occurs again and again in the old silver jewelry of the Turkoman people.  Here is a durable and imaginative ring, at least 70 years old.  It was old when I collected it in Turkey in 1970.  That is just one instance of the dome motif in my Turkoman jewelry collection.  Here is another: 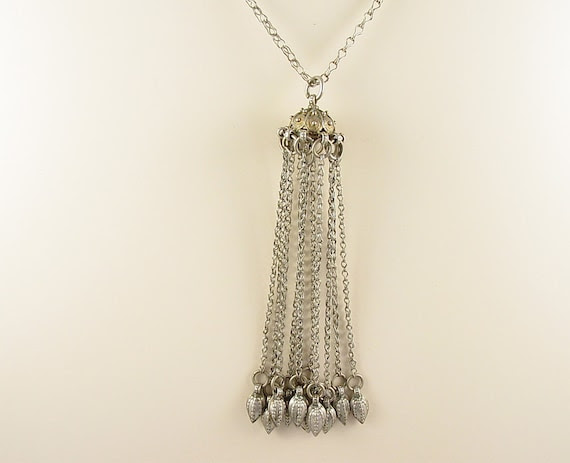 Further details on such items are  available at: http://craftsofthepast.artfire.com
The pendant above is gilded in the process described in the immediately previous blog post at this site.  It is also decorated with granulation -- domed dots of silver over the curvature of the gilded dome.  The silver objects on chains hanging from the dome reinforce the idea of earthiness.  They are sometimes understood as inverted mountain motifs.  (Schlechter, Old Silver Jewellery of the Turkoman, 1983).
In Turkey and Afghanistan, I continued to find instances of the same dome motif in Turkoman jewelry.  In time photos of most of them will find their way into the posts on this blog.
Posted by Anna Garner at 6:49 PM No comments: