Gilding Silver in Yemen and Turkmenia

It is time to talk about gilded jewelry from the 1900s specifically in Yemen and Turkmenia.  First to note is the fact that most jewelry at that time was made of silver by highly accomplished silversmiths with very basic tools and sometimes employing hazardous techniques in making the gold layer over the silver.  Such jewelry is termed vermeil or gold plated, gold washed or gilded.  It differs from a metal alloy wherein the gold and silver would be blended quite thoroughly in the liquid state.

Here is a good example of Turkoman silversmith work in a gilded tumar/bozbend; that is a mountain symbol (tumar) with a prayer tube (bozbend) at the bottom of the tumar of this very fine piece of antique workmanship.

See more information on this piece at my website.

Since gold plate is what we moderns are most familiar with (we are ignoring gold tone which does not use gold), we will begin there.  Gold plated and gold filled are the same kind of jewelry, only that gold filled usually but not necessarily means that there is a thicker covering of gold than with gold plated jewelry.   When I first dealt in jewelry many years ago, gold plate actually had more gold on it than did the gold filled.   At present, silver is plated with a relatively thin gold layer with modern machines that do electro-plating.  It is usually done in a factory, but it can be done in a home workshop.

This method was not available to the West Asian people in the early 1900s.  They employed heat from a fire, first to melt the metals they were using and then to apply the gold layer to the silver in a permanent covering.  The best methods and highest skill were found among the silversmiths of Turkmenia: the Turkoman settled regions of Central Asia.  First of all, by 1900, they were able to trade with Europe for genuine silver ingots, so they began the crafting of their silver jewelry with precious metal.

When the ingots were melted, the silversmiths began the rather hazardous work of applying the gold in a process which produced vaporized toxic material.  I provide here a very over-simplified description of the process:

The method of applying the gilding is quite interesting, and it lasts much longer in the Turkoman jewelry than it does on most jewelry of the Middle Eastern regions. After the silver has been hammered and smoothed to the perfect thickness, the pieces cut and inscribed, but before the gemstones are set, thin gold plates are heated red hot and mixed with mercury, the amalgam being placed in water. Then it is applied to the desired parts of the cleaned silver surface. The silver becomes amalgamated with the application of certain mineral powders, after which the gilding amalgam can be applied and then heated. As the piece heats from warm to hot, the silversmith uses cotton wool to rub the piece to evenly distribute the mineral.

Below is a photograph of a kirdan or Yemen woman's bridal necklace worn at her wedding and on special occasions thereafter.  Most of the kirdans of the early 1900s and previous were not gilded, but this piece is.  The method common among Yemen jewelers possibly used an open crucible in the heating and melting process, because the gold amalgam layer is not as durable as the process used in Turkmenia.  With long wear and exposure to weather, the Yemen gilding will simply rub off  or discolor because of the chemicals used in its application.  If it has not worn away, a brisk buffing will bring the shine back.

There are more photos, more information and more similar pieces at my website in this section.. 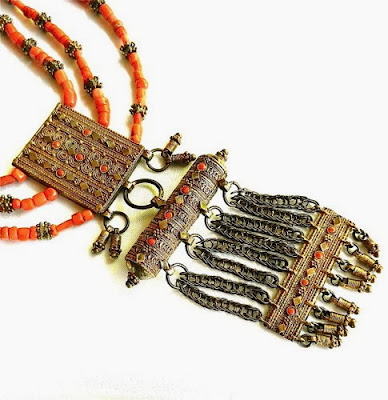 Yemenite gilded silver plaque and prayer amulet with fertility symbols attached.
See more information on this piece at my website.